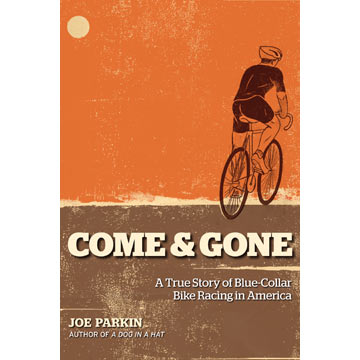 After five years of blue-collar cycling in Belgium (A Dog in a Hat), Joe Parkin returns to the United States looking for a ride. He joins the elite Coors Lite road team as a key member, but the adjustment to domestic racing, with small crowds, inexperienced teammates, and poorly promoted events, proves difficult. Disillusioned, Joe is ready to hang up his cleats when he is offered a contract with a pro mountain bike team. The freshness of mountain biking proves to be an elixir: Joe's career blossoms and he rediscovers his love of the sport. Come and Gone is a rare, frank, and intimate sports memoir.

“BESTE JOSÉ,” I WROTE AS I HUNCHED OVER IN THE BACKSEAT OF
my team’s Pontiac Transport minivan. My head was propped against the seat in front of me, and I stared at my lap. “I am writing this letter to thank you for the opportunity to ride for you,” I continued in Flemish. We’d just finished a small threeday stage race in North Carolina and were heading out. I knew I would likely never finish the letter, much less mail it, but I was homesick for Belgium and this was the only way I knew how to escape the hell I was experiencing. José de Cauwer had been my boss for the past three years, and although I wouldn’t call our relationship anything more than a normal working one, I had an enormous amount of respect for the man who’d barked orders at me from a team car all over Europe.

I stared at the page. Less than a year before, I had been living in Belgium, riding for José’s Tulip professional team. Now I was in the southern United States and had just ridden the final criterium of a stage race for little other reason than the fact that we were there. That morning, when we had gone to check the race’s general classification, my teammate Tom Armstrong and I had found our names at the bottom of the list. We’d been relegated to last place and next to last and were trying to figure out why. We found a U.S. Cycling Federation (USCF) race official and politely asked if a scoring error might have been responsible for our new spots at the back of the race. After cross-referencing our names and race numbers, the USCF official informed us that we had been disqualified from the previous day’s stage because we’d crossed a road’s center line.

“Seriously?” I asked, trying my best to stay calm. Ever since I had left for Belgium in the spring of 1986, I’d enjoyed the liberty of using all available road, curbing, sidewalks, and dirt paths while racing. Keeping to the right side of a center line was a whole new obstacle. “I find it interesting that only two of the eight or so pros in this race were busted. The whole peloton was over the line at some point or another yesterday.”

I knew this was going to be a futile argument.

“You were the ones who were caught,” the official explained.

“I find that hard to believe,” I countered. He shrugged. Dejected as I was, I would have been content to end the discussion there, but he then told us in which laps our respective crimes had occurred. I had been disqualified at the beginning of the second of eight laps.

“Are you kidding me? Why wasn’t I told? I would have quit.”

“It would have been unsafe for the motorcycle official to do that,” he offered. It was a lame excuse, in my opinion. I had gotten used to bumping into the hordes of TV, photo, and police motorcycles that work the major races.

“Then you should have yelled at me from the start/finish line.”

“You wouldn’t have quit,” he said.

“We’ve tried that before,” he explained. “No one ever quits. They just think they can argue their way out of it after the race.”

“I would have quit. I think I should have been given the benefit of the doubt.” I was fully aware that no reversal of our sentence was going to be granted. The first thing they teach you in umpire school is to never, ever change your call, even if it is the worst one ever made, and I assume USCF officials are given similar advice. He was doing a good job of handling an angry bike racer, and I was doing a pretty good job of being polite, albeit with a dash of condescension.

“I should have been told,” I argued again. “It was 100 degrees out there yesterday. I would have quit. I am not out here for my health.” I caught a slight hint of confusion in his eyes and began to understand that I was a type of bike racer he had not previously encountered. The notion of intentionally dropping out of a race is foreign to most bicycling enthusiasts.